Cole Blaq started an art project several years ago that showcased a vast multitude of different representations of the standard 2 x 4 stud LEGO brick. I was inspired to make my own interpretations in the style of Cole’s Enter The Brick series.

A casket seemed a logical, if morose, place to start. I’m a big horror fan and Halloween was closing in that this point, so a creeping threat from the crypt was where my head was at.  Come to think of it, Samhain approaches again…

Brick Two – Conquest Of The Brick

I may be a big fan of horror, but Science Fiction is my mother’s milk. I think the thing that drew me to comic books was the deep roots in sci-fi that many if not most shared during my childhood. Classic sci-fi is a favourite of mine and the black and white reels of the 50’s are some of the best. This was inspired by films like The Flying Saucer, The Day The Earth Stood Still and War Of The Worlds. I got to build a fun invasion scene and also a micro version of the National Mall.

I wanted to incorporate the idea that the invaders had been here before (in the prehistoric age) and used the old Millennium Falcon dish as the failed colony ship. The new group of invaders are not holding back and have no love of politics. This was the brick I broke with the standard 2×4 brick shape. I kept the dimensions of the actual brick but the eight studs are in random positions and at different sizes represented by the various saucers and tripods. It was a fun build and worth a revisit at some point.

I guess you could say this was my first foray in ‘Mixed Media’. I built the brick to the proper dimensions with SNOT techniques, but it didn’t look right and I wasn’t happy with the aesthetic. I rebuilt it with the colours in the positions I wanted and then framed the edges with black electrical tape cut into tiny strips. It didn’t feel right, but it captured what I was looking for exactly. The feeling I had broken my own rules was washed away when I donated the build to Creations For Charity (an organization that buys LEGO sets for children for Christmas) and it raised a nice sum for a worthy cause. I wish I could have done better for Piet. Maybe in the future I’ll make a LEGO Mondrian inspired dress in the style of Yves Saint Laurent someday to atone.

Who knows, maybe Mondrian would’ve liked this one more. I was inspired to build a puzzle toy from LEGO in the style of a Jacob’s Ladder. It was quite fun to play with once I figured out the proper engineering to allow it to change to as many different configurations as possible. My son played with it off and on for days until I scavenged the parts for another build.

Brick Five – An Adventure In Time And Money

LEGO and marriage. Both are adventures in expenditures of time and money and, arguably, both are worth it. I wanted to get back to a more pop culture-y take on these brick exercises and decided to revisit the Doctor. I liked putting the eighth stud on top to fit in the sign and it seemed to work perfectly in proportions. I grew up with the TARDIS being full of pointless circles, now it had them on the outside. At the time I finished, my wife was scheduled to do an engagement photo shoot for a couple and she found out they were big Whovians. She mentioned this build and they asked if it would be alright to use it as a prop so I added the knob inside and away it went. This box was regrettably not bigger on the inside, but it made up for that flaw by directly inspiring the very next brick.

Ghostbusters is the perfect blend of horror,  sci-fi and comedy in my book and I’d always wanted to do a ghost trap. The TARDIS door design worked perfectly and I only had to make a few structural changes to accommodate it fitting into the outer control casing. The 80s nostalgia was flowing through me like a Free Floating Full Torso Vaporous Apparition now.

Brick Seven – The Future is NOW! 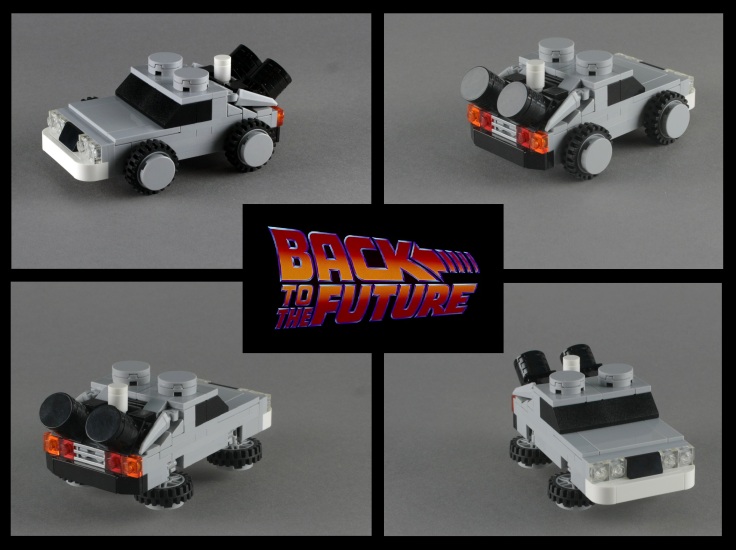 This was my way of celebrating the date from Back to the Future II finally arriving. October 21st 2015 has come and gone, but I’ll never forget the sacrifices Doc Brown and Marty made to save us from that multiple jaws sequel filled nightmare and somehow create this seemingly worse, flying car-less one. I shortened the studs on the hub caps and heightened the studs on the rear vents that exact amount so technically the dimensions are sound. Thankfully that beautiful time machine was built from an ugly brick of a dud. Complete with Mr Fusion.