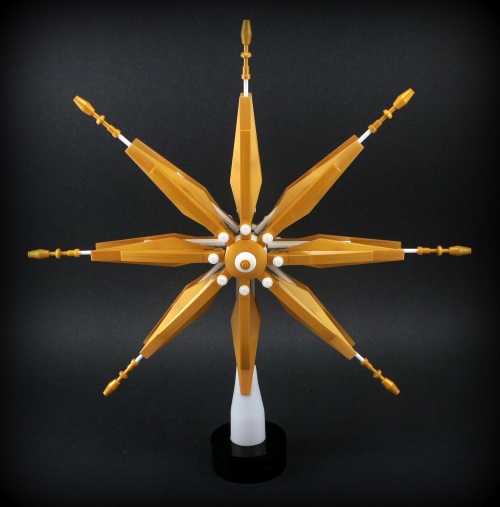 In 2011, I was playing around with all the pearl gold parts I had doing a speeder bike build when it dawned on me that I had enough parts to do a golden star for the top of our Christmas tree. It was a big hit with the family and I’ve been building a new one every year ever since. 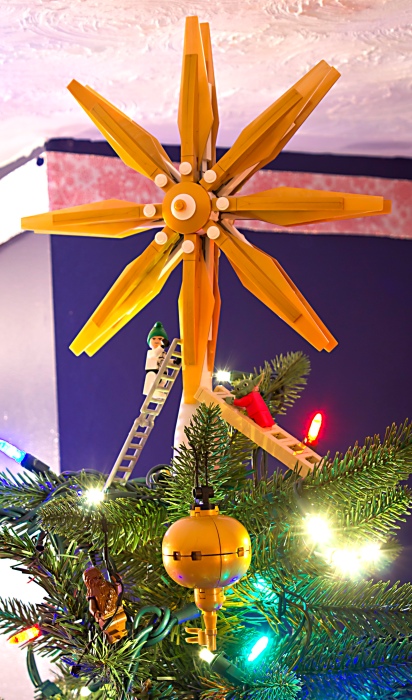 The first year was a hit, but not without hiccups. First, I built without proper measurements. Luckily, I was able to remove the accents from the tips to shorten the points. I also had to build a rigid enough frame to support it by essentially a one stud width rod in the middle of the bottom point. It worked and fit snuggly in the holder we had from our old topper. My son and I also built a matching golden ornament and decorated the top of the tree with some LEGO helpers.

I wanted to keep both the “star” and the “gold” aspects of the previous year while incorporating more geekiness, but I was a bit late getting started. While I was happy with how it turned out, I’d say it was our least favourite. Again it was too tall (by 1.5 cms) and the reinforced structure needed to hold it up was noticeable and unattractive. Still worth it for the looks on some visitors faces alone!

I decided to break with the star pattern I had been working with previously and went full on geek for 2013. Our family are huge Doctor Who fans and my wife and I have been watching since we were little kids. I barely had enough blue bricks and tiles to complete it and I had to make custom signs, but I was really happy with the final product. It was the first year I lit a topper as well and even found a tiny enough set of LEDs that they fit up in the roof light and even phased slowly. I made a wreath for the door (not pictured) out of LEGO frogs in honour of the AFOL frogmaster, Karf Oohlu. The cotton batting on the bottom gave it the perfect ‘sitting on a cloud’ look. It still goes to shows with my display and always gets plenty of attention from the Whovians.

After successfully convincing my family to let me build a box to put on top of our tree the previous year, I decided to do it again. Perhaps the most iconic of all boxes, the Question Mark box took three Bricklink orders and a lot of good karma to complete. The whole thing has a very flimsy skeleton in concept, but held together well regardless of the weight. It was the brightest of all the toppers also and my wife seemed quite crushed when I dismantled it a couple years later for the parts.

In 2015 I asked my family for input on the topper that year and they unanimously chose a snowflake theme with blue accents. I aimed for a look akin to a paper snowflake and lit the larger blue accents to give it more pop. I had the measurements down pat by this time as we had a new tree. I did however need to come up with a new way to mount the toppers to the wider tree tip. A cardboard tube wrapped in Xmas paper does the trick nicely.