Any team with Spider-Man on it is the A-Team in my book! What better way to end Super Hero Week than with my favourite hero in the last set of the Infinity War line.

As a set, this Sanctum Sanctorum is a fantastic pile of parts and welcome after the relatively small Doctor Strange set we got after his movie. There are lots of neat details but the window and the circular cut out plates around it are my favourite pieces. I’m always impressed when official sets use non-traditional techniques and there were a few good ones in here, like the middle window on the second floor of the Sanctum.

But we all know it’s really about the figs. I never got around to actually building my Doc Strange set, so this is technically my first Master of the Mystical arts and he’s great. I can’t wait to add him to my Avengers line up. You get the same Iron Man that’s in the Thanos set her which is disappointing at this price point. They should have used the same model suit, since there’s only one in the film, but made it battle damaged. We have to wait until Bricktober to get plain clothes (with chest doohickey) Tony and Wong to add to this set. Easy enough to bring Bruce over. 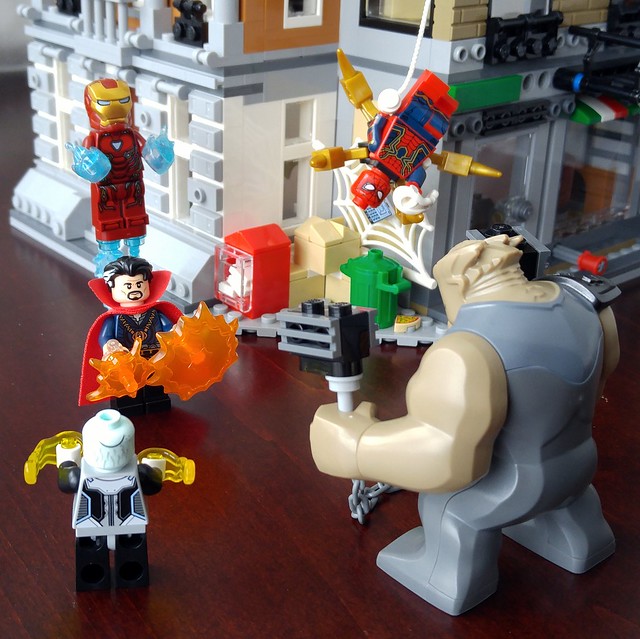 Cull and Ebony are well done and I’m pleased to have the entire Black Order, but it bothers me when we get these one off big figs when we’ve been waiting for some big fig characters for years. Where’s Rhino? Or how about Venom or Kingpin? Must I resort to the knock off brands to get these guys forever? I guess that should be a separate post…

Getting Iron Spidey was the real treat here. I like practically every version of Spider-Man and nearly every suit variant, so getting a new LEGO one is awesome. I really love the MCU Iron Spider design, so I’m really glad they didn’t leave it out and just go with the standard MCU suit. I already posted that I want Spider-Man 2099, so then we’ll just need Superior Spider-Man, Spidey Noir, Armoured Spider-Man, Spider-Girl, the new Scarlet Spider, Spidey UK, Arácnido Junior, Future Foundation, Big Time Spidey… again, separate post.

Well, I hope you enjoyed Super Hero Week as much as I did and don’t worry I’ve got plenty more if it returns next year!