I found this comic in a grocery store in 1993. It wasn’t the Spider-Man I had known and loved since infancy. This was something new, something different. All I knew for certain was that I liked it and I had to track down the first two issues I had missed. With a trip to my local comic shop, the now long gone Sorcerer’s Stone, I’d found my favourite version of my favourite character. Now I just need him in LEGO. 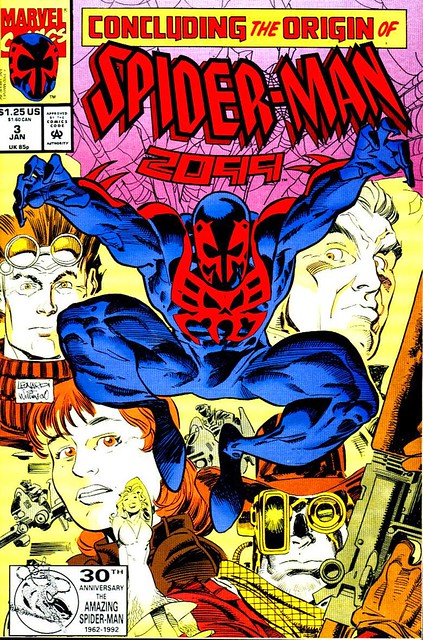 Ok, so just a bit of background on Spidey 2099. The most important thing to me is that this is not some time displaced, other-dimensional or ancestor of Peter Parker. Miguel O’Hara is a geneticist living a century in the future who manages to replicate a power set based on the original Spider-Man of his past. He is a more acerbic version of Spider-Man as well, being less quippy and more of an a-hole. Still, he was new and interesting and I saw a lot of who I was growing into in my early teen years in him. As with a great many things, Spider-Man 2099 rooted itself into the my brain in those formative years. There he has remained, growing and evolving in my mind and in his tiny slice of the comics world for the past 25 years. 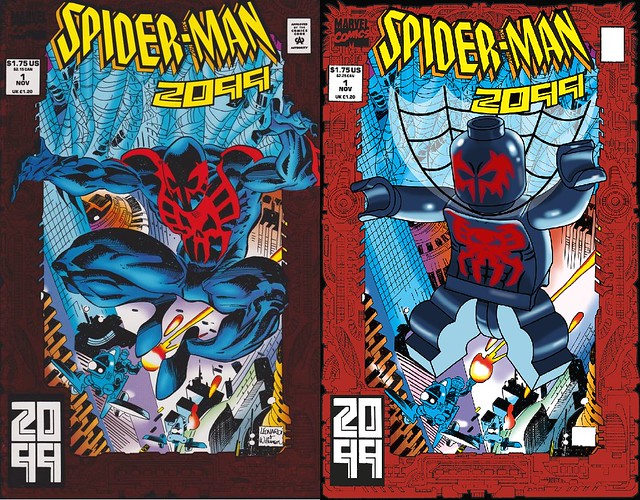 In recent years though, he had made a resurgence in comics with two further print volumes launching in 2014 with the original writer/creator, Peter David, once again at the wheel. But just because he came back for more short lived comics, isn’t the only reason I want to see him immortalized in LEGO form. Miguel has started popping up more frequently in other media due to how big a role he played in the Spider-Verse event in Marvel Comics.

That event led to him having a couple of other comic appearances, outside of his regular title and the Spider-Verse series. It also created a host of other materials based on it like the Shattered Dimensions Video Game. Those appearances spawned a role in a multi episode run on the Spider-Man cartoon that aired a couple years ago and with any luck he’ll be in the upcoming Into The Spider-Verse animated movie. You see, it’s already been shown that Spider-Gwen and Spider-Man Noir will be in the film, so it’s likely that 2099 will be as well since they tend to lump them all together when Spider-Verse is mentioned. 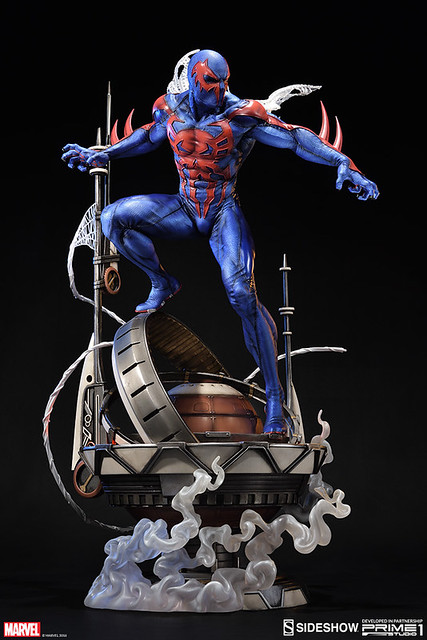 Now of course there has been merchandising over the years, it’s just not as common as Peter Parker/Spidey stuff. I have multiple action figures, Mini Mates, vinyl toys and other collectibles and there have been some high-end offerings as well. Like this statue from Sideshow Collectibles that will set you back a thousand bucks Canadian, by the time it get shipped to you. So, there is a demand. Now the amount of children that would immediately recognize the character is of course a smaller number, but how many kids today would recognize the original Scarlet Spider? Yeah, but he got a minifigure a couple of years ago… which I love. 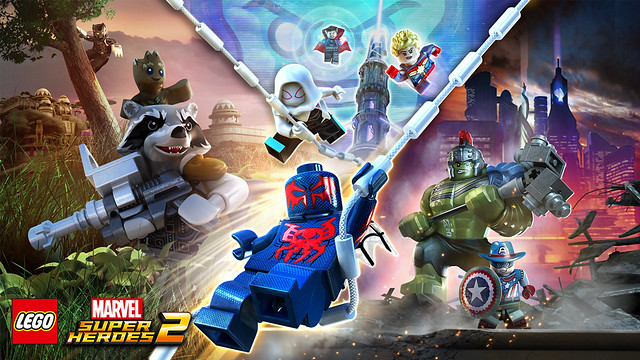 So all of this is just my rationalization for wanting a beloved character from my childhood and I should just suck it up and move on, right? Well, I’ve got one more rationale for you. He’s front and center of the new freaking LEGO game! Yeah. He has a big piece of the game wrapped around him too. With 16 areas in the world of “Cronopolis”, (all from Marvel comics or just general time periods to help rationalize certain characters like mummies, cowboys or Merlin) like Wakanda or Sakaar, three areas revolve around Spider-folk. Manhattan gives you Spider-Man and Spider-Gwen so they can chase Goblin 2099 around together. Manhattan Noir gives you the titular Spidey with the twin pistols (he’ll be voiced by Nicolas Cage in the upcoming Spider-Verse film) and Neuva York introduces Spidey 2099. The two central minifigures on the box are 2099 and Spider-Gwen and guess who’s coming out in a set later this year. Yep, the newly renamed Ghost Spider.

Rubbing salt in the wound was the exclusive fig for pre-orders. Giant Man. He’s barely even in the game and is useless at that point as you’ve already unlocked multiple characters that do everything he does. Plus, why that suit? Oy. Speaking of costume choices, I want to be clear that I want to see the classic 2099 outfit. The one that’s been around 20 years, not the “All New, All Different” one that resulted from Parker gifting him a high tech mish-mash recently. They can make that one later!