Since it’s the final week of the Summer of LEGO, I’d better pull out all the stops. I figured I’d start Super Hero Week by building four sets from the Avengers: Infinity War line. I watched The Incredibles while I did it too. Really trying to cram in the maximum amount of “Super”, here.

These sets represent what I feel Marvel set up as the “B” team in the film. The characters were split in three groups, but Thor, Rocket and Groot showed up at the end to shore up the last line of defense. It’s a great bunch of figures all around with teen Groot and Shuri being my favourites.

Lots of cool parts in the sets too. The Wakandan set has plenty of useful ones, plus trans-purple panels and gold bars. The Hulkbuster is probably the best of the the two minifigure scaled ones and I think works better if you actually wanted to fight a Hulk with it. I like the swinging arm mechanism and the easy way of adapting it to lock in place. Also you could make it so both arms swing around by swapping out four small parts, so that’s an option.

The Outrider Dropship is ridiculously undersized and seems more like a Necrocraft, but it’s still a neat build with some good parts. I guess the Thresher is technically scaled down to the same size, which is kinda funny when you think about it. It would have been neat to see a giant buzz-saw vehicle set, but not this time around. Rocket’s escape pod is cute, but I was really impressed with how it combined with the new GotG ship. it not only looked complete, it looked really cool. I’ll take a picture later and post it on Instagram or something. Pretty sweet though.

The only issue I have is that now my Thanos has five out of six Infinity Stones. Luckily the Time Stone comes in the biggest set in the theme and I generally don’t get big sets due to the expense. Unless they have something I greatly desire in them. Like a rare Spider-Man variant, or something… 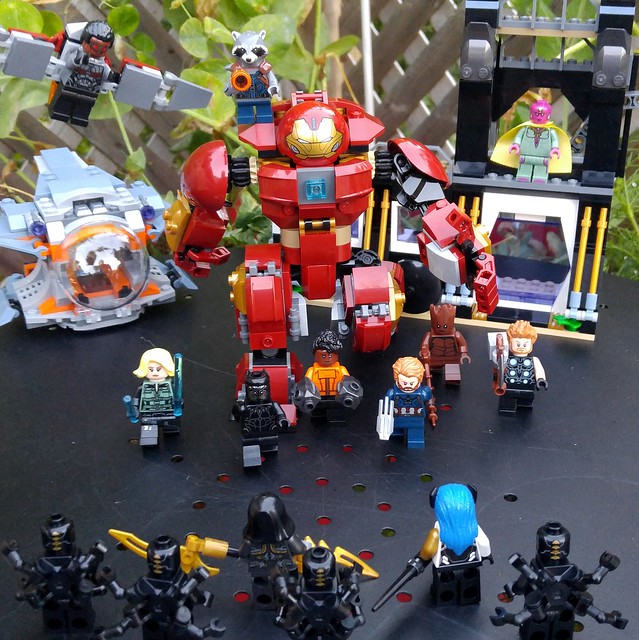