Since it’s Super Villain Week I thought I’d find a way to display some of my favourite bad guys. It just so happens that Michaels had a buy one get one free sale on shadow boxes and display cases. It turns out that the coin & trinket display case fits a standard minifigure perfectly.

So, these are normally $40 CAD each, but with the BOGO deal they’re far cheaper than buying the official LEGO minifigure cases. Also, those cases only fit 16 minifigures, but you can squeeze two in each compartment if one stands behind another and they’re both off center. This way I can fit six on each row regardless of capes or, as you can see with the Vulture, wings. So with a total of 36 figures in essentially the same amount of space as the official cases, I’d have to say these are far superior. The only thing the LEGO version has going for it is it’s shaped like a brick. I won’t be getting rid of the ones I already have, but I’d doubtfully buy more.

These trinket cases aren’t perfect though. They’re almost 25 studs wide, but the dimensions aren’t perfect so I just went with a 2 x 16 black plate and a 2 x 8 held together with 2 x 2 tiles and jumper plates for the figures. This leaves a little space on either side, but not enough to worry about them sliding back and forth. If the minifigure is taller due to a weird helmet or hairpiece, it may not fit either. Red hood only fit in the position seen here and one other shelf and roller derby Harley Quinn couldn’t fit with her big hair AND roller skates, so the skates had to go.

There is another bonus though. The door has a gap between the glass and the shelves inside, so figures like Harley and The Riddler can hold their fancy accessories in front of them and still have room. Even General Grievous just fits without the figs looking too crowded. This won’t be the final line up in this case as it’s just the villains I could put hands on the quickest. I’ll have to reassemble a few I really like and there are a few in sets I’ll be building soon that I want to put in, but unfortunately Loki won’t be one of them. At least not with his awesome helmet.
Too tall.

I guess I better find that greasy looking hair piece of his. 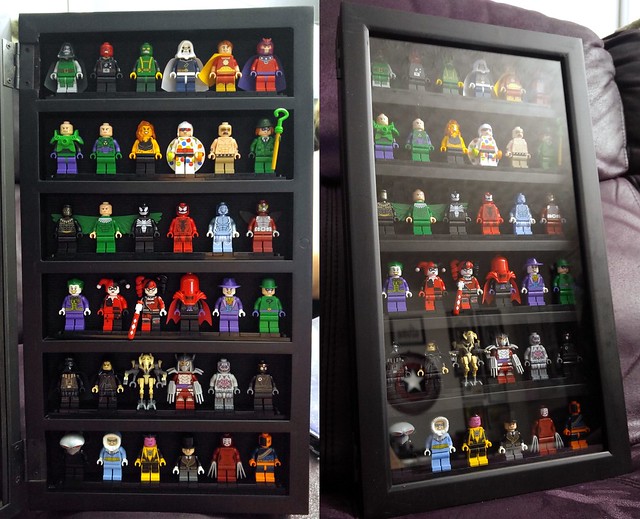 The catch on this deal was that they only had one of these in good shape. I bought the other open one in rough shape, so I could get the deal and have to wait until they restock to take it back and exchange for a new one. That was the best option they could do for me.

Hopefully they restock soon. I may have to get a couple more of these later…

Oh, I almost forgot to mention. In order to make the figures stand out a bit better, I’m planning on making a custom background that looks like a police line up wall measured in LEGO plates.