Let’s start Super Villain Week with two of the biggest archnemeses in the DC Universe. Like I’ve said before, you can judge a villain by the quality of their nemesis and these two certainly swing big.

The original Cheetah was created by William Moulton Marston and first appeared in the sixth issue of Wonder Woman in 1943. I’m sure this is supposed to be the current incarnation of the character, but that’s fine as I grew up with this version and still remember seeing her drawn by George Perez when I was a kid. Lex Luthor has been around slightly longer, having debuted in 1940. He’s easily the most recognizable of the two having been in multiple movies and voiced by Clancy Brown in the excellent Superman and Justice League animated series’s.

This isn’t the first time LEGO has produced a mech for Luthor, but it’s the best one so far and that’s what you want to see. There should always be improvement in newer versions of sets, because it’s really disappointing when a rehash is also a downgrade. This is the third or fourth time we’ve seen Lex in some form of his power armour as a minifigure as well. Plenty of tech in his closet at this point, but at least he’s not running for Iron Man.

The mech works well, but it’s a bit boring as there’s not a lot going on. A few neat pieces and some pearl gold, but otherwise bland. Don’t get me wrong, a kid could stomp super heroes with this guy for hours and have a ton of fun. My son spent half the day Frankensteining a train with some UFOs today, so he’s gonna love playing with this. I, on the other hand, have a ton of mechs, so if you don’t do anything to make it stand out… meh.

Honourable mention to the heroes in this set. The wonder Woman looks good, and I always love seeing her, but Firestorm is the standout here. I love seeing the B and C string heroes pop up in sets and he’s a welcome addition. I’m really loving these little baggies of transparent energy blasts and I want to get them in every colour.

Not pictured: Batman. That guy gets more than enough attention and they need to stop putting him in everything. I think this is the only time he pops up in this wave, which is a start. This fig is basically the same as the one coming in the Brother Eye Takedown set, so I guess this is his “Takedown suit”. 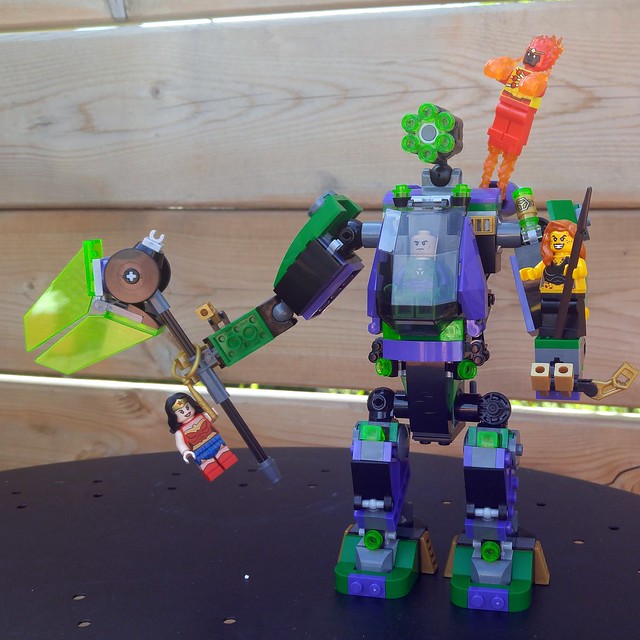