That’s right, this past weekend Jeremy Bulloch announced his retirement from the convention scene through the Boba Fett Fan Club. It’s the end of an era for fans of the greatest bounty hunter in the galaxy.

Mr. Bulloch released this message through the website on August 4th:

It is with a heavy heart that I have decided to stop attending conventions and hang up the Fett helmet. It has not been an easy decision to make. In 1979 I was called onto the set of Empire Strikes Back to play Boba Fett, and since that day it has changed the entire direction of my life in such a wonderful way. It has been a privilege to have had the opportunity to inspire so many generations of Star Wars fans. I have had over 20 years of travelling with my wife Maureen to some amazing countries and have met so many wonderful fans. Thank you all so much and we will miss you all.

‘May the Force be with you always’ 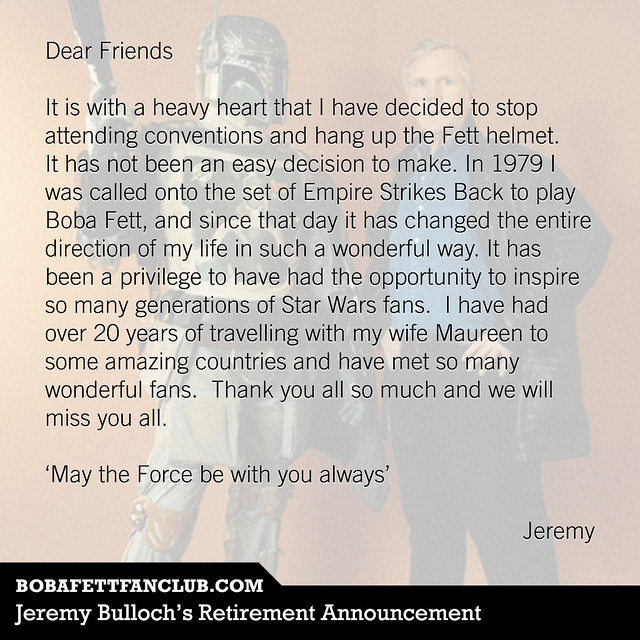 Being an introvert, my wife convinced me to attend our first convention because Jeremy Bulloch was to be a guest. After we had already bought our tickets and made our reservations, he cancelled for what we later found out to be health issues. I was crushed, but we went anyway and did our first three cosplays. It was a fantastic experience and we started going regularly. In 2015 we started taking our son and he loved it too. Then in 2016, Jeremy Bulloch was finally able to come and not only did we get to meet him, my son and our close family friend got to spend some time with him on stage. Running Shakespeare lines no less! 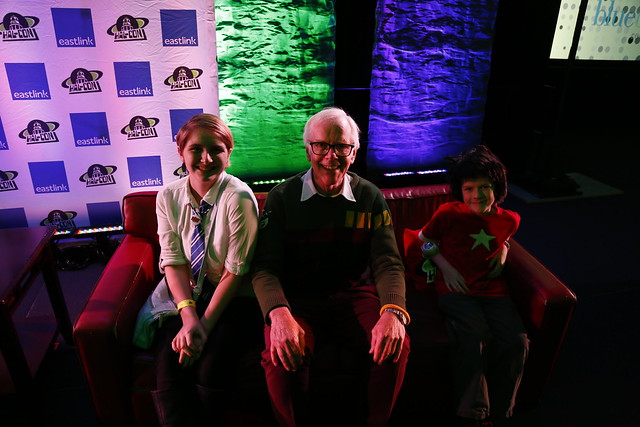 It was a pleasure meeting Mr. Bulloch and it’s a memory I’ll cherish forever that I was able to share with my son. I hope he and his charming wife enjoy the peace of retirement. If you never got the chance to see him at a convention, he’ll still be taking part in send-in signing.

If you have something you’d love to get autographed, you can send your requests here: imperialsignings@hotmail.co.uk.

May the force be with you, Mr. Bulloch.