Burned out on gaming after the Incredibles let down so, today is back to the basics and there’s not much more basic than Minecraft.

As much as I like building, I’ve never been interested in doing it virtually. I still remember when my nephew excitedly showed me this little indie game he’d become obsessed with. I didn’t get the appeal then and I don’t get it now. My son loves it and often plays it on the PS4 with his friends. I still have zero interest and that generally extends to the LEGO sets as well, but this one has such delicious parts I couldn’t resist buying every one I found on clearance. I think I’m at 4-5 now, but if you can pick them up for $15 or less, I’d highly recommend it.

Basic 2 x 2 bricks and plates in dark red, dark brown and grey. Modified 2 x 2 tiles with studs and the version shaped like a shield. And those curved tiles… awesome!

I’d buy more on sale in a heartbeat, but I shouldn’t… 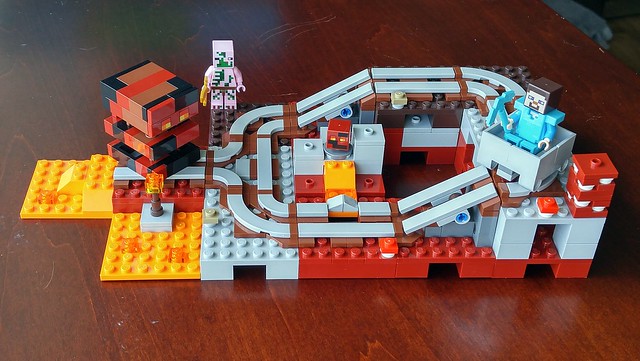