When Lowery Cruthers says “That first park was legit” in Jurassic World, he was absolutely right. I saw Jurassic Park in theatres when it came out in 1993 and it instantly became one of my favourite monster movies. The sequels have never really lived up to the original, but they’re all fun to watch from time to time, because dinosaurs. I didn’t have to re-watch the first movie while I built this set I’ve waited 25 years for, but of course I did. Let’s do a mini review with this one, shall we?

First up, the minifigures. You get the four main characters of the film, Alan Grant, Ellie Sattler and Hammond’s two grandchildren, Lex and Tim Murphy. These are the outfits they are wearing when they start the tour, not how those outfits look by the time they reach this scene, thankfully. Ellie, Lex and Tim all have alternate frightened faces, but Dr. Grant, nope. He’s just tickled pink to have his life’s work hunt him down for lunch. These figs are great overall and they do give you hair for Alan, but I always think of him in his hat. 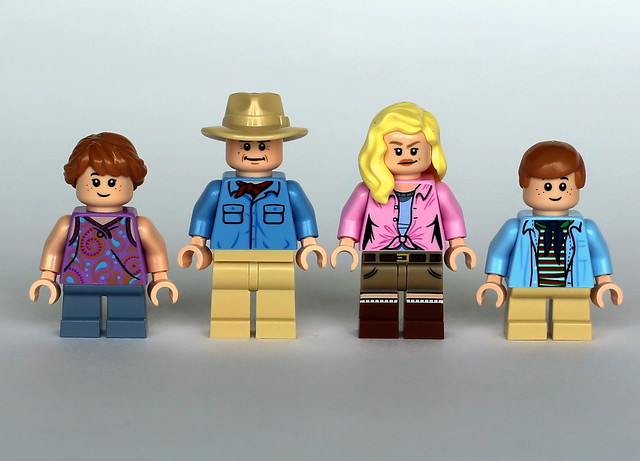 My only complaint is that it doesn’t have Ian Malcolm and John Hammond. Everything is better with Jeff Goldblum. This could be easily remedied by putting Hammond, Malcolm and game warden Robert Muldoon in a jeep escaping a T-Rex. Add the lawyer in a port-a-potty, so the Tyrannosurus has someone to eat and you’ve rounded out the set perfectly. Complete the entire film with Denis Nedry in a small jeep being eaten by a Dilophosaurus and you’ve covered all the bases! 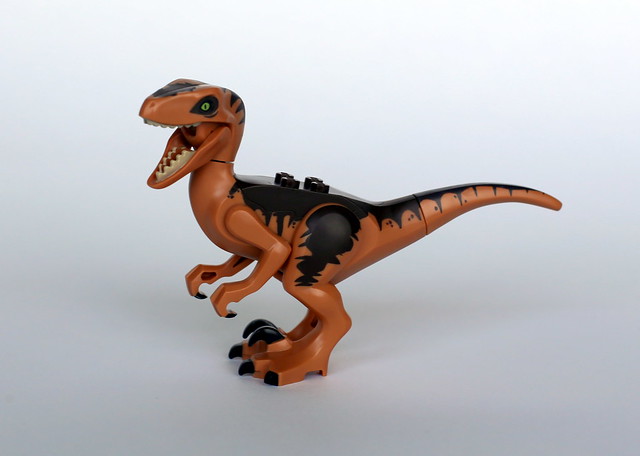 On to the real star of every one of these films and sets. The dinosaur. 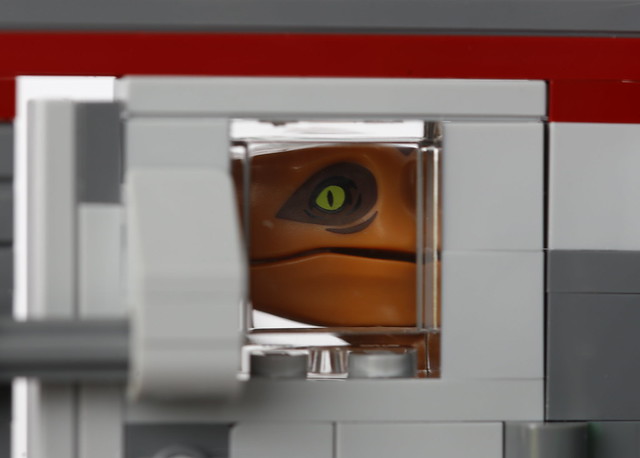 This is the 9th variant of the new LEGO raptor that they launched in the Dino theme. They’re all a bit different, and some look more drastically different than others. Even the two versions of Blue are very unique. I like this colouring on the raptors, even if green is generally what pops into my head when I think of them.

The build itself feels like three smaller sets. Two small, battle pack sized ones and one in the $20 range. It works far better like this of course, but it is built to be pulled apart if you want to play with sections individually. 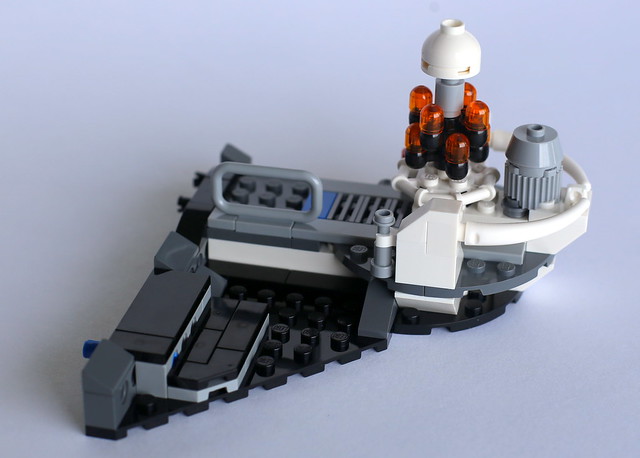 First up is the DNA lab or embryonic storage area. It’s actually a pretty neat little design. This would be where your Denis Nedry figure would fit right in. “Oh, stop complaining about not getting the figures you want!” you might be saying, but… but, they even included the can of Barbasol he tried to smuggle the embryos out in. At least we got a sticker of his cartoon computer virus. Some good parts, but not much for play here, Unless you’re a huge nerd and could sit for hours pretending to extract DNA and editing genomes together. Actually that sounds like fun. 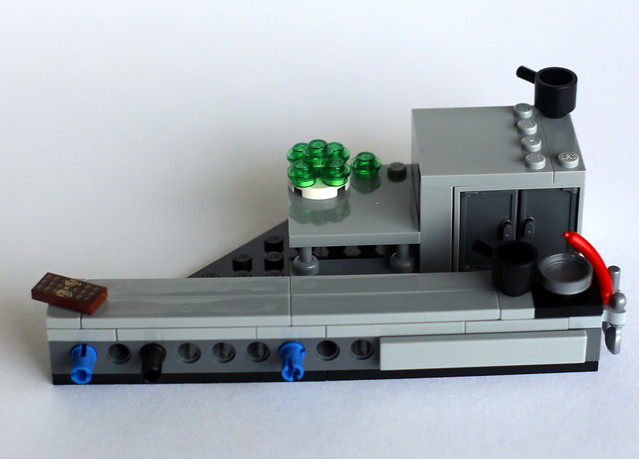 The other small part is the kitchen where you can have the raptor chase the kids around and around the counter. They can crawl through the cupboard and fry up some sausage as a midnight snack. I love getting more hot dogs and the butcher knife is a rare treat. Otherwise, there’s not a lot going on in this kitchen. All the ice cream melted… 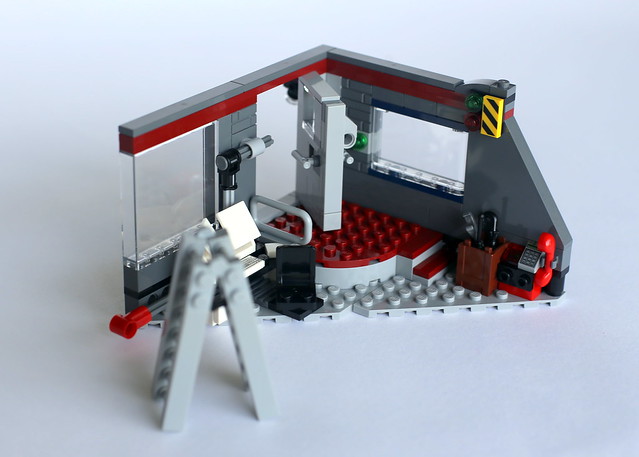 And now, the control room. It’s the meat of the set and there are some nice parts and features, overall. The window to the left of the door pops out and you can squeeze the raptor through when she gets too frustrated trying to get into the locked door. The door locking mechanism is simple but works well, sliding into the hole on the door just far enough to hold it in place. There’s a computer terminal where Lex can do her hacker thing and save everyone’s butts. There’s a phone and a box of random crap in the corner and when you’re done playing in the room, there is a ladder so everyone can escape into the ceiling (not included). 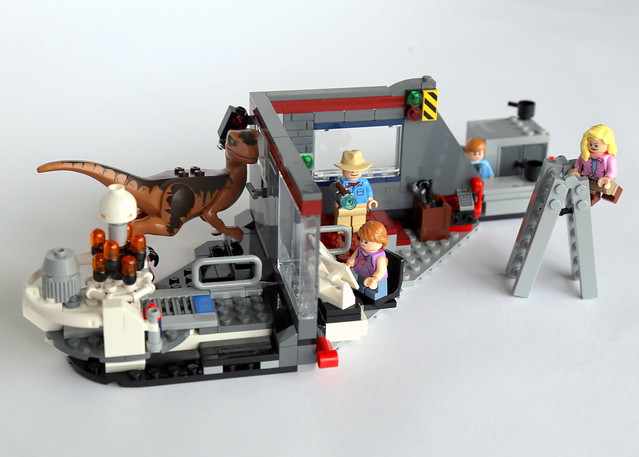 So there you have it. If you’re a fans of the original Jurassic Park this set hits the right nostalgia buttons. I recommend it to anyone who enjoys playsets and remember, this is the long game. If you want this set or this raptor, the after market prices are going to be crazy within five years. I give it 3.5 out of a possible 5 studs and might have to pic up an extra for the box fort. Go get it!